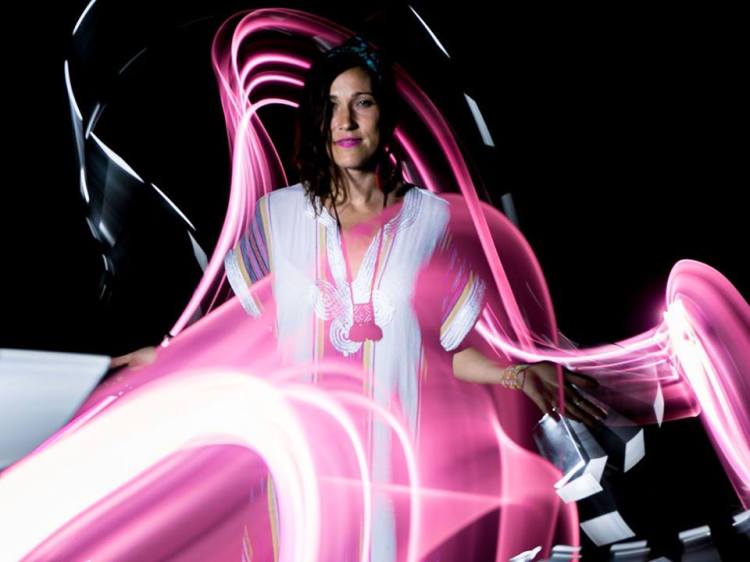 Maegan Gorbett, famously known as DJ Alma ∞ Omega, grew up in Ohio and Virginia during the “glory” years in the 80’s & 90’s in The United States. After a transformative year abroad studying in Holland she followed her heart at the age of 21 and immigrated to The Netherlands for the next 10 years. While studying various alternative healing & therapy methods, she started DJing with her now former partner as they began to create experimental partiesm, without alcohol, inspired by the Underground House scene of the U.S.

In 2010 Maegan moved to Berlin with her ex and was given the chance to experiment and dive into the unknown, little did she know how transformative the journey would be. The first 3 years tested her marriage to the limits, and led to the end of her relationship. With nothing but a laptop full of music, a desire to begin again, and absolutely nothing to lose 3 years later she started to connect with many amazing souls from various scenes in Berlin – the common thread that wove those people & scenes together were a common curiosity and hunger for freedom, expression, consciousness, healing and community (set to an amazing music soundtrack).

Since what she describes as her death/rebirth period in 2013, Alma ∞ Omega has been working full time as an artist, DJ, embodied-dance-teacher and creator of conscious-gatherings – creating bridges between sub-cultures. She went on to co-found Lucid in 2015, a ritualistic gathering weaving music, dance, ritual, community and consciousness in Berlin. Her intention is to connect and awaken the Berlin-Urban-Tribe to power and purpose, individually and collectively.

Finding this balance between following your heart and also having to pay your rent and groceries each month – many sacrifices have been made by those working in the Underground!

What inspired you to become a DJ and creator?

I went to my first house-party back in 1997 in Amsterdam (at the age of 18), a night that changed the course of my life forever. The freedom, open-hearted space & release I experienced totally woke something deep inside of my soul, and I wanted more. When I moved back to The States between 1997-2000 I was fortunate to live on the East Coast during a time in which both rave culture and Underground House was thriving.

What inspired me the most to this day were the Sunday House gatherings I attended in Washington DC and New York City. I was usually the only white person in attendance (most people were African-American, where the roots of House come from). Very little alcohol or drugs were consumed and everyone would dance like their bodies were taken over by pure spirit. Experiencing the true underground of House music – uplifting ourselves by the gifts of dance, music & being together – is my complete muse and inspires me to this day with everything that I create. This power touches me so so deep inside my soul, to share this feeling with others is the sweetest bliss.

What is the biggest roadblock you’ve faced professionally? How did you overcome it?

My biggest road-block, and at the same time one of my most beloved assets, is the fact that I don’t have a road-map at all as to how to create my career.  I am simply creating this path as I go along, based on my instincts and passion-radar. It’s both a blessing and a curse. There are very little artists that are walking the path that I’m walking on so, it’s hard to know how to make decisions, and what to focus on sometimes. Finding this balance between following your heart and also having to pay your rent and groceries each month – many sacrifices have been made by those working in the Underground! You have to make your own roadmap, step by step.

Who inspires you the most?

The artist and human that inspires me the most is Bjork:  since I was 17, her music has been the soundtrack to my adult life, each album like a chapter out of my own life…her absolutely unique and authentic expression touches something so deep inside of me, I feel so blessed that she is alive and sharing what she shares…Also how she transforms herself as an artist and human touches me so deeply:  she has been very open and vulnerable (about her relationships & the breaking up of her marriage) and she is very active in raising ecological awareness for the Planet through her art and message. She is 52 and still creating the most fantastical shows and music: no one is like Bjork, and this uniqueness is a pearl in the ocean of pop-bullshit-brainwashing of most main-stream music.

I would protect this city more from greedy capitalists and culture-suckers that are bringing little to no creative culture to the city.  It’s really changing the fabric of this city we love – and changing it fast.

What do you do when you need some inspiration?

I find a way to be in solitude in some way and allow myself to go on a nourishing adventure with myself: that usually includes some sort of journey into nature and dancing to really fine music. I used to go to clubs by myself and really allow the music to take me over, allow my body to be nourished, just close my eyes and focus on me. Now, I’ve gotten a bit too sensitive for most clubs so, usually I drink some Cacao at home and play musical tapestries, sometimes recording, but nature is the all-time inspiration. I find myself trying to soak up as much raw nature that is possible, even inside the city.

What is one thing you love about Berlin and what is something you would change?

What I love the most is the value of freedom that seeps through all the cracks inside the city. This city has been through so much and attracts freedom-warriors from around the globe -I love this! Most people let each other simply be in their expression and I truly appreciate this so much. Living in The U.S. or Holland people are generally judging or analyzing one another more on the streets. I love to be ignored by most people as I do my thang in Berlin.  I am encouraged to have an “egal” attitude, which I can enjoy.

What I would change is that the city government would wake up to the selling of the land and therefore the soul of the city,  in a few years time, who can afford to live here? So many people talk about gentrification like it’s “just the way it is”, but I think this is bullshit. Gentrification is built upon decisions made by humans and with more consciousness and respect buildings/places/subcultures can be more protected. I would protect this city more from greedy capitalists and culture-suckers that are bringing little to no creative culture to the city.  It’s really changing the fabric of this city we love – and changing it fast.

What events or projects are you excited about in the next year?

I’m super excited to launch more Lucid-related gatherings – we stopped doing the monthly gatherings a year ago (due to the huge amount of work and non-sustainable structures needed to keep it going). We are now finally founding a Vereign and will be organizing at least 3-4 weekenders during the year, on top of Lucid Satelights (creating all-night smoke-free-cacao-filled parties in various clubs – bridging the worlds between club-land and something new).

We are currently doing our best to invite Charles Eisenstein to Berlin in October with the intention to create a gorgeous gathering for us all to learn, connect and grow on certain huge topics like the emerging crisis and climate change…and of course weave in some sort of celebration to dance our hopes and dreams together. Really keeping my fingers crossed we can finalize booking him!

Want to keep up with Alma ∞ Omega, here’s how: